Dawn Prayer: (Or How to Survive In A Secret Syrian Terrorist Prison) A Memoir 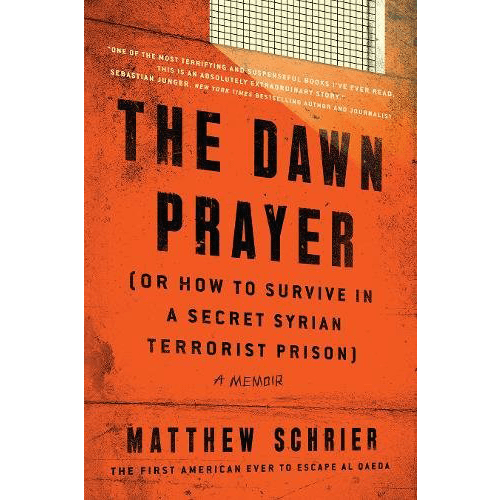 The Dawn Prayer (Or How to Survive in a Secret Syrian Terrorist Prison): A Memoir is a tale of patriotism and unimaginable bleakness shot through with light . . . of despair and friendship, sacrifice and betrayal, in a setting of bombed-out buildings and shifting alliances. It’s the story of the first Westerner to escape al Qaeda—not a battle-hardened soldier, but an ordinary New Yorker who figured out how to set his escape plan in motion from a scene in Jurassic Park. From the prisoners’ fiercely competitive hacky sack games and volleyball tournaments (played using a ball made of shredded orange peels and a shoelace) to his own truly nail-biting outbreak, Matthew Schrier’s story is unforgettable—and one you won’t want to miss.

“What is your name?” asked General Mohammad.

“Matthew,” I said. I had stopped saying Matt a while ago because it means ‘dead’ in Arabic.

On New Year’s Eve in 2012, Matthew Schrier was headed home from Syria, where he’d been photographing the intense combat of the country’s civil war. Just 45 minutes from the safety of the Turkish border, he was taken prisoner by the al Nusra Front—an organization the world would come to know as the Syrian branch of Al Qaeda.

Over the next seven months, he would endure torture and near starvation in six brutal terrorist prisons. He’d face a daily struggle just to survive. And, eventually, he’d escape.

In this gripping, raw, and surprisingly funny memoir, Schrier details the horrifying and frequently surreal experience of being a slight, wisecracking Jewish guy held captive by the world’s most violent Islamic extremists. Managing to keep his heritage a secret, Schrier used humor to develop relationships with his captors—and to keep himself sane during the long months of captivity.