Member of the Family: My Story of Charles Manson, Life Inside his Cult and the Darkness that Ended the Sixties 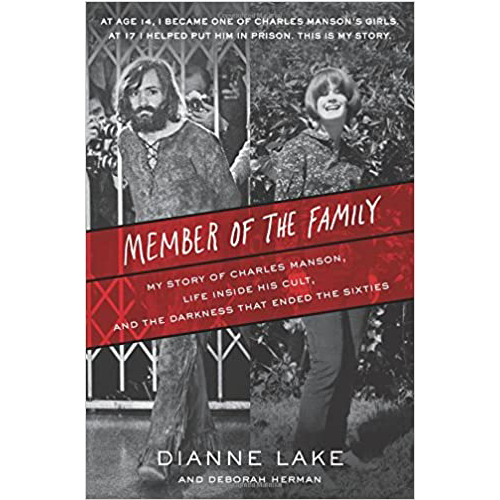 At age 14, I became one of Charles Manson’s Girls. At 17 I helped put him in prison. This is my story.

At fourteen Dianne Lake—with little more than a note in her pocket from her hippie parents granting her permission to leave them—became one of “Charlie’s girls,” a devoted acolyte of cult leader Charles Manson. In this poignant and disturbing memoir of lost innocence, coercion, survival, and healing, Dianne Lake chronicles her years with Charles Manson, revealing for the first time how she became the youngest member of his Family and offering new insights into one of the twentieth century’s most notorious criminals and life as one of his “girls.”

Over the course of two years, the impressionable teenager endured manipulation, psychological control, and physical abuse as the harsh realities and looming darkness of Charles Manson’s true nature revealed itself. From Spahn ranch and the group acid trips, to the Beatles’ White Album and Manson’s dangerous messiah-complex, Dianne tells the riveting story of the group’s descent into madness as she lived it.

Though she never participated in any of the group’s gruesome crimes and was purposely insulated from them, Dianne was arrested with the rest of the Manson Family, and eventually learned enough to join the prosecution’s case against them. With the help of good Samaritans, including the cop who first arrested her and later took her into his home, the courageous young woman eventually found redemption and grew up to lead an ordinary life.

While much has been written about Charles Manson, this riveting account from an actual Family member is a chilling portrait that recreates in vivid detail one of the most horrifying and fascinating chapters in modern American history.

Member of the Family includes 16 pages of photographs.

“Fans of Emma Cline’s novel ‘The Girls’ will enjoy this nonfiction account of a teenager living under Charles Manson’s cult leadership in the ’60s and her eventual aid in his arrest and imprisonment.” (amNewYork)

“If a taut psychological thriller is what you like, Member of the Family crushes it.” (Northwest Indiana Times)

“[A] disturbing, courageous memoir… Her testimony, at age 17, helped convict Manson. This is a moving, intense insider’s view of the cult of Manson.” (Publishers Weekly)

From the Back Cover

In late 1967, fourteen-year-old Dianne Lake became one of “Charlie’s girls,” a devoted acolyte of cult leader Charles Manson and member of his Family. Joining the group with little more than an old note from her hippie parents granting her permission to leave them, the two years that followed were a mixture of sexual manipulation, psychological control, and physical abuse, as the harsh realities and looming darkness of Charles Manson’s true nature revealed themselves to the impressionable teenager. Though Dianne never participated in any of the group’s gruesome crimes, as one of its longest members, she lived through it all, becoming a crucial eyewitness to the Family’s descent into madness and ultimately providing critical testimony against Manson and his collaborators that helped put them behind bars—for life.

Now, in this poignant and disturbing memoir, Dianne shares the full story of her time with Manson, revealing how she became the youngest member of his Family and offering new insights into one of the twentieth century’s most notorious criminals. For the first time, Dianne opens up about her life in the Family—from her countercultural upbringing that led to a chance encounter with Manson at a party to group acid trips at the infamous hideout Spahn Ranch to the sexual control he exerted over the group—showing how the free-love ethos of the era enabled the charismatic and calculating Manson to take advantage of young women, often to devastating ends. Drawing upon never-before-told stories, Dianne delivers an inside account of how Manson’s paranoid volatility grew over time, mixing dangerously with his con-artist sensibilities and fondness for using physical violence to poison the group, culminating in the final chaotic months before the horrific Tate-LaBianca murders brought the idealism of the 1960s to a stunning conclusion.

And yet, in spite of her painful experiences, Dianne was one of the few to emerge stronger from the torment of the Family. With the help of the California police officer and his welcoming family who took her in as a foster child following her arrest, Dianne was able to transform her trauma into triumph, finding the courage to face Manson in court and achieving a redemption that allowed her to heal.

Featuring sixteen pages of photos, the end result is a riveting look at how one young girl reckoned with her past and helped convict one of the most diabolical and fascinating figures in modern American history. While much has been written about Charles Manson, Member of the Family re-creates in vivid detail the firsthand experience of someone who survived his wrath, returning to a time and place that changed America forever—a moment when anything seemed possible and the horrors to come unthinkable.