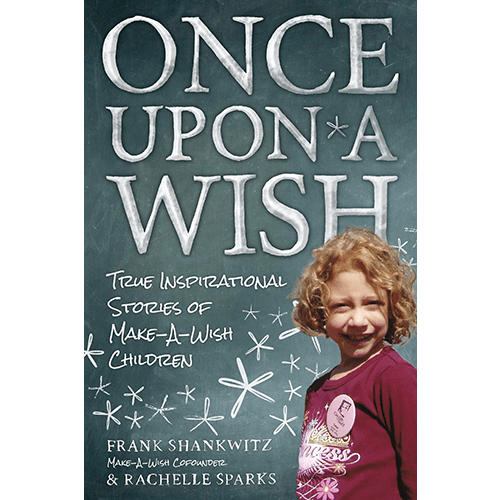 Once Upon A Wish: True Stories of Make A Wish Children

Experience the story of Katelyn, a little girl becoming a medical marvel after defying all odds stacked against her and making it her life-long goal to raise $3 million for St. Jude Hospital; read about Garrett, a boy using a wheelchair who is giving the gift of mobility to disabled Cambodian men and women; and root for the family of Dakota, a little boy who collects millions of pennies each year to help others fight the disease they once fought. Become inspired and forever changed by the generosity, hope, courage, and optimism of these children and their families and experience the power of two words, “I wish.”

Once Upon A Wish is a celebration of hope, revealing how wishes-come-true can become the ultimate motivators and cherished gifts that will last a lifetime.

Frank Shankwitz is a co-founder and first president/CEO of the Make-A-Wish Foundation, founded in 1980. Still actively involved, he is featured as the keynote speaker for fundraising events at chapters across the country and has also served as a board member for the Arizona chapter. Shankwitz has been featured in numerous media outlets, including New York Times bestselling author Brad Meltzer’s new book, Heroes For My Son, USA Weekend Magazine, The Huffington Post, Glenn Beck, and in newspaper articles around the world. Shankwitz is an Air Force veteran and retired as a detective from the Arizona Department of Public Safety with more than 32 years of service.

Rachelle Sparks worked as an award-winning journalist for a daily newspaper in Prescott, Arizona, where she wrote stories about the unforgettable “wish” families who became her inspiration for writing Once Upon A Wish. She then became a freelance writer for numerous publications, including Arizona Highways magazine and the Phoenix and San Francisco editions of 944 magazine, while venturing the country to interview and capture the stories of the families featured in this book. She lives with her husband, Bobby, and their two sons, Andrew and Evan, in San Diego. This is her first book.

In the last 30 years, the Make-A-Wish Foundation® has granted nearly 300,000 wishes worldwide to children battling life-threatening illnesses, shedding light on worlds darkened by disease and bringing hope to children and their families.
From Make-A-Wish® cofounder Frank Shankwitz and author Rachelle Sparks, Once Upon A Wish shares the wishes of eight children–their stories inspiring testimonials to the resilience and strength of the human spirit. These families generously invite us into their worlds, allowing us to become part of their darkest moments, their unimaginable realities, their greatest hopes, deepest fears, and unbelievable triumphs.

Be the first to review “Once Upon A Wish: True Stories of Make A Wish Children” Cancel reply