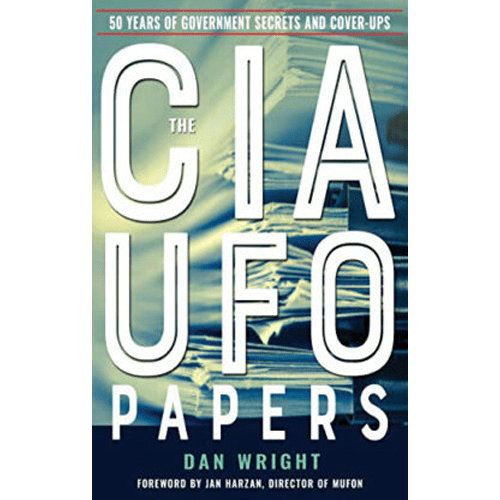 In autumn 2016 the CIA sent to its website (www.cia.gov/library/readingroom) a cache of electronic files previously released under the Freedom of Information Act but housed at the National Archives. Among a variety of subjects were “unidentified flying objects.” Finally, a stockpile of reports and correspondences were available for serious UFO researchers to examine at home.

This book consists of selections from those secret files. Dan Wright spent 18 months selecting, editing, and organizing the 550 files that are relevant to UFO research and has produced a chronological collection of CIA documents spanning 1949 to 2000.

Each chapter focuses on a particular year. The summary of documents for each year is followed by a section called “While You Were Away from Your Desk,” which provides historical and cultural context for the document summaries and examines other sightings and contacts that are not mentioned in the CIA files.

Among the fascinating tidbits are:

This is a must-have book for those fascinated by the history of UFO sightings and those interested in government secrets and cover-ups.

This is a chronicle from the 1940s through the 90s, of UFO-related news that reached the Agency’s attention. These files released to the CIA website in 2017 do not constitute a tell-all file dump—though Agency officials might protest that assertion. To demonstrate, each chapter concludes with a section titled “While you were away from your desk . . .” There, UFO incidents of consequence in that same year, arising in the United States or elsewhere, are summarized. These are cases that were not mentioned in the 2017 cache of documents. A majority of these involved pilots, police, and other trained observers. As officially stated concerning the US Air Force and its Project Blue Book, events potentially involving a national security threat were withheld. One could expect nothing different from the CIA. The 550 usable files on the Agency’s website are, as a certain president under threat of impeachment once said, a “limited hangout.” Still, in sum they tell quite a story. – Dan Wright

Dan Wright was born in Grand Rapids, Michigan and earned an M.A. in political affairs from the University of Illinois. Following a career as a researcher and technical writer for the State of Michigan, he retired to Athens, Georgia.

Dan joined the Mutual UFO Network (MUFON) in 1978 and thereafter served variously on its staff and board of directors. As deputy director he oversaw thousands of UFO investigations across North America. For five years he conducted a MUFON project to transcribe and analyze regressive hypnosis sessions related to possible alien abductions.