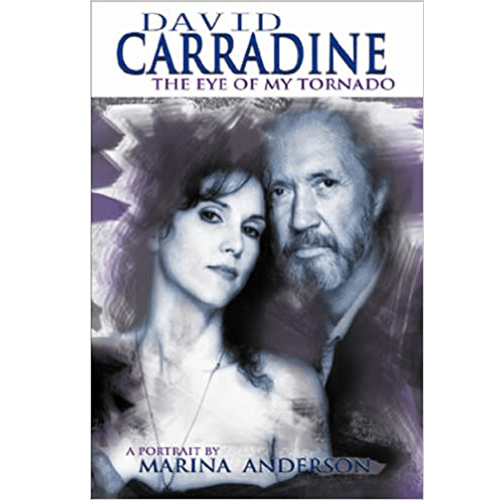 David Carradine: The Eye Of My Hurricane,

The following applies to no matter what version of my book is being sold – hardcover, paperback, ebook…MY MESSAGE TO READERS IS AS FOLLOWS: Originally, the main purpose for writing this book was first to help heal myself and maintain a sense of humor as I vented.  I found as I talked to people about what David and I went through, and as friends read chapters, it was helping by opening a door to dialogue, especially about “taboo” subjects.  It then became my mission to help empower others through my experiences and David’s – our life together as well as apart.  Through our journey together, maybe others will see how they too can help themselves — confront their demons, issues, seek answers, recognize patterns, listen to their instincts, get clarity, closure, and healing. If people reach out and are open to change, miracles can happen. It’s not to say it won’t be painful, but we can transform our lives for the better.  By bringing various sensitive issues out in the open, I hope this book sheds a beacon of light on a path for others to find their way as I did.
MA

David Carradine, a world icon, had a volatile, dark, and brilliant personality. His acting career spanned four decades on stage, television, and cinema becoming an international sensation as Kwai Chang Caine in the ’70s hit TV series, Kung Fu, starring in classic movies Death Race 2000, Bound for Glory, and Quentin Tarantino’s Kill Bill, which vaulted Carradine back onto the Hollywood A-list. David Carradine died in a Bangkok hotel room, on June 3, 2009, an apparent victim of autoerotic asphyxiation. Marina launched her own investigation into the death of her ex-husband. Her conclusions are startling. As his personal manager, Anderson was credited for Carradine’s career resurgence that lifted him from a has-been drunk to restoring his legacy as a sober “A-lister”, culminating in landing the plum role in Kill Bill. Anderson exposes it all: Carradine’s alcohol addiction, “dark side”, “deviant behavior”, including incest, which contributed to the destruction of their marriage. It is a complex story of two souls intertwined. Anderson writes with candor, humor & doesn’t hold back as she recounts their most intimate moments. This memoir takes us on a journey of personal healing through Marina’s life, from the abuse she suffered in her early years to beyond her marriage with David. It was a whirl of auditions, star-studded parties, exotic locations, red carpets, and a star on Hollywood’s Walk of Fame. Reader’s experience first hand a fascinating behind-the-scenes account of celebrity life in the fast lane. Anderson recounts their inability to have children and IVF attempts, how others can benefit from her experience, metaphysics, psychics, astrologers, numerologists played a part in her support system including famed clairvoyant, John Edward. There are selected funny, poignant stories from friends and those who worked with Carradine. This personal account represents Marina’s final therapy, the struggle to regain her “self” back while trying to save her marriage. Her heart-rendering, empowering struggle of overcoming obstacles to a healthier life.
This is a balanced portrait critical, sympathetic, mature, yet loving look at her life with David. Also included is an intense interview with DR. DREW PINSKY (Celebrity Rehab, Sober House, Loveline) who addresses their specific problems. The results are quite a revelation.

Be the first to review “David Carradine: The Eye Of My Hurricane,” Cancel reply