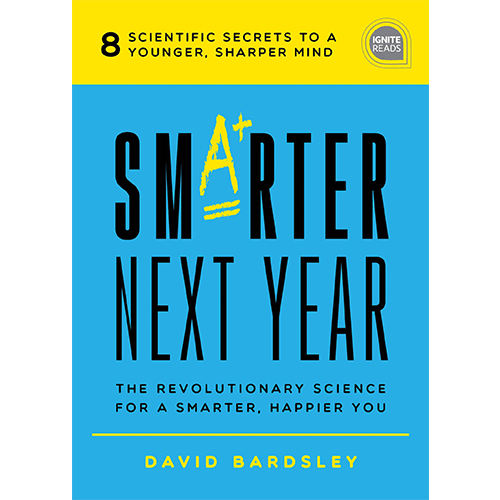 This is my second book, my first book, the Less Than Perfect Child, was about my true life story of growing up misdiagnosed as mentally retarded; it would turn out I had the Tourettes Triad  ( Tourettes, ADD, OCD ). My parents refused to believe the diagnosis and instead encourage me to be physically active, medication free, and believed in me. Until I believed in myself, I would go on to become an Oral and Maxillofacial surgeon.

THE SCIENCE has changed about what we understand about the BRAIN; what we once thought was hard-wired, we now have evidence that the brain is not only plastic and able to change we can also increase our intelligence AT ANY AGE OR STAGE OF LIFE.

David Bardsley is a bubbling cauldron of optimism, intellectual curiosity, and exuberance. But it wasn’t always that way. David’s was a troubled childhood, punctuated by years of intensive medical investigation, a period of institutionalization, and a misdiagnosis of mental retardation by the time he was nine years old.

Fortunately, it was a diagnosis his parents refused accept. They supported him, encouraged him, and challenged him to achieve what doctors said would be impossible. Eventually their mantra, “We believe in you,” became his mantra, “I believe in me.”

His is a remarkable story of perseverance and the unconditional support of loving parents. It was not easy, he would struggle with his dysfunctional behavior for nearly two decades before a correct diagnosis of Tourette’s Syndrome and ADHD was made, but he would go on to earn a B.Sc., M.Sc., D.D.S., and Fellowship in Oral & Maxillofacial Surgery.

Today David carries that passion for self-actualization into every part of his life. He is deeply passionate about the benefits of education and our ability to shape our own destiny when in comes to the quality of our lives.

He is the founder of Silver Eagle Media, a company dedicated to helping individuals increase their cognitive ability and perform at their highest intellectual level. He spends most of his time crisscrossing the continent presenting his message to business executives, teachers, parents, students.

Contrary to accepted belief, YOU CAN INCREASE YOUR INTELLIGENCE AT ANY AGE! Smarter Next Year presents the latest scientific evidence for improving your mind and staying healthy at all stages of life. This inspirational book provides simple but eye-opening steps to lead you to a healthier and happier life.

This quick 1-hour read written by Dr. David Bardsley will change the way you think about your brain. The insightful brain hacks provided in this book give you a foundation of change for improving your health and mind.

The bottom line? GENES DON’T CONTROL YOUR INTELLIGENCE. YOU DO.

Your brain ― and every brain ― is constantly evolving and changing. In fact, there are multiple scientifically proven paths to increasing your memory and IQ ― at any age ― through simple life changes.

Do you ever struggle to recall something you had just been thinking about moments ago? Or have an idea that was fresh in your mind become clouded before you can take action? Eliminate such issues for good using Dr. David Bardsley’s simple 8-step program! No matter your age or cognitive abilities, by applying these scientifically proven tips, you can take steps to become smarter, sharper, and healthier ― NOW!