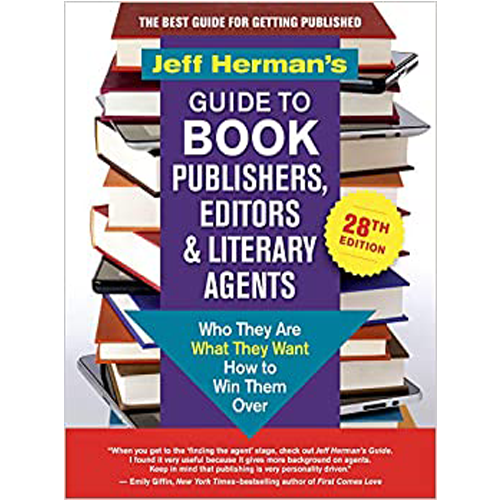 Jeff Herman’s Guide to Book Publishers, Editors and Literary Agents: Who they are, What they Want, and How to Win them Over

Jeff Herman started this iconic guide at the same time he opened his literary agency. He found the gatekeepers were standing in the way of writers and the agents who represent them, so he found a way around them and through them. Now in its 28th edition, the guide has sold over 500,000 copies and has launched the careers of such luminaries as Meg Cabot with the Princess Diaries, and is recommended by writers as the only book you need.

“I highly recommend Jeff Herman’s Guide. It was the most helpful book I bought about how to get published.”
— Nicholas Sparks, New York Times–bestselling author of A Walk to Remember

“Jeff Herman has done a service to every writer who wants to make a living in this business. Every author should have a copy on their shelf.”
— Chip MacGregor, literary agent

“Everything you need to get started.”
— Cheryl Richardson, New York Times–bestselling author of Stand Up for Your Life

“I got my agent by using this guide!”
— Meg Cabot, New York Times–bestselling author of The Princess Diaries

“When you get to the ‘finding the agent’ stage, check out Jeff Herman’s Guide. I found it very useful because it gives more background on agents. Keep in mind that publishing is very personality-driven.”
— Emily Giffin, New York Times–bestselling author of First Comes Love

“I sent my proposal and sample pages to ten agents selected from Jeff Herman’s Guide and was shocked to receive interest from three of them. I celebrated when I signed with an agent and again when my first book was sold.”
— Jacqueline Winspear, New York Times–bestselling author of Maisie Dobbs

“Here’s my two cents: I used Jeff Herman’s Guide. It includes a huge list of agents, interviews about what they are looking for, and useful info on big and small presses.”
— Kristy Woodson Harvey, author of Lies and Other Acts of Love

“If you are only going to get one book on this subject, Jeff Herman’s Guide is the one I recommend. When I was looking for an agent, this was the book that showed me how. The only thing is, you have to do what it says.”
— Marie Bostwick, author of Between Heaven and Texas

If You Want to Get Published, Read This Book!

Jeff Herman’s Guide is the writer’s best friend. The 28th edition, updated for 2019, includes strategies to finding your way through today’s field of publishers, editors, and agents.

Get the most up-to-date information on the who’s who in publishing: The best way to ensure that your book stands out from the crowd is to find the right person to read it. You can find the right people to read your book by using this guidebook. In Jeff Herman’s Guide to Book Publishers, Editors, and Literary Agents,  Jeff Herman reveals names, contact information, and personal interests for hundreds of literary agents and editors, so you can find the publishing professional who’s been waiting for you. In addition, the comprehensive index makes it easy to search by genre and subject.

If you want to know who the publishers, literary agents, and editors are, what they want, and how to win them over, this book is for you.

Learn to write a winning pitch: This highly-respected resource has helped countless authors achieve their highest goals. It starts with the perfect pitch. You’ll learn the language that publishers use, and ways to present yourself and your book in the best light.

Trust the expert that insiders trust: Bestselling authors and publishing insiders recognize Jeff Herman’s Guide as honest, informative, and accurate. New and veteran writers of both fiction and nonfiction have relied on this no-nonsense guidebook for decades. Everything you need to know to publish your book is compiled in this one go-to resource.

1 review for Jeff Herman’s Guide to Book Publishers, Editors and Literary Agents: Who they are, What they Want, and How to Win them Over